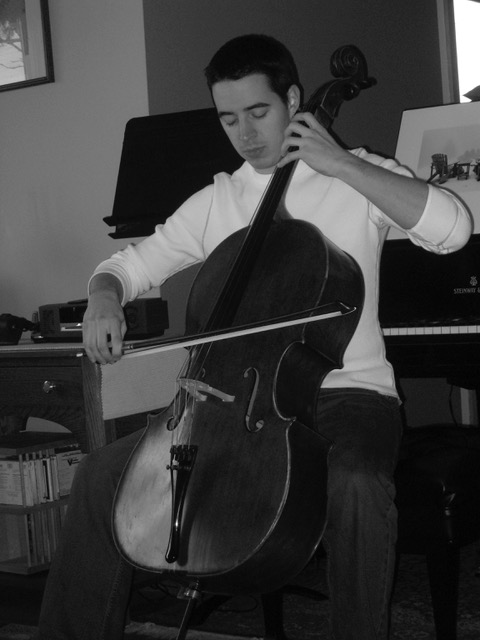 Christopher started the violin at age of three with his mother, who is an established Suzuki teacher and Teacher-Trainer in the Philadelphia area. At the age of 4, his father, a Suzuki bass teacher and performer, switched him to cello while his mother was out of town. Fortunately, she has since forgiven them both.

When he turned 16, Christopher began his undergraduate studies at the Hartt School of Music at the University of Hartford in Connecticut. After two years, he transferred
to the Cleveland Institute of Music, where he completed his undergraduate degree in Cello Performance while studying with Stephen Geber, former principal cellist of the Cleveland Orchestra.

After graduating, Christopher moved to Chicago to start his Masters in Cello Performance with Stephen Balderston, who had just retired as the assistant-principal cellist of the Chicago Symphony. He also obtained a Performance Certificate while studying with Brant Taylor, another cellist in the Chicago Symphony. While in Chicago, he worked with world-renowned Suzuki teacher Dr. Tanya Carey to be registered in all 10 Suzuki Books, and participated in a private Practicum Course with Dr. Carey, where his teaching was extensively evaluated over an entire school year.

Christopher has been teaching since the age of 18, and has taught in various Suzuki Institutes and Workshops across the United States, as well as Canada, Bermuda, Puerto Rico, and Costa Rica. He has helped to build numerous cello programs, including working with Michele George and Diane Sloane at East Cleveland
Rainbow Suzuki Strings, in East Cleveland, Ohio, and the DePaul Community Music Division in Chicago, Illinois. He has also been the Cello Director at both the Oak Park String Academy in Oak Park, Illinois, and the Merit School of Music in Chicago, Illinois.

Christopher currently lives in Washington, DC with his wife Amy, and their two kittens, Murphy and Maizy.