“Practice” is no doubt an overly used term that is familiar to everyone, especially to musicians. However, what does this word “practice” encompass? Musicians spend a significant portion of their time in music rooms, but it is important to keep in mind that quantity does not equate to quality. Differences in productivity are due to the level of higher-level cognitive processing in play during practice sessions, where the musician falls prey to unconscious practice.

A few months back, I took a step back and started questioning myself as to whether my practice sessions were productive or not. Throughout the years, practising has become a routine to me that I sometimes end up running through my piece for hours and hours during my practice sessions unknowingly.

To improve the quality of practice, goal setting and self-evaluation are one of the many few methods that can be implemented for musicians to work towards deliberate practice to achieve more productive sessions. (Kageyama, 2019) Before I started working on my piece, Élégie, Opus 3 No. 1 by Sergei Rachmaninov on the piano, I took some time to analyze the score and demarcated section boundaries instead of rushing into playing the piece. This analysis not only allowed me to understand the structure of the music in depth, but also allowed for me to mark out section boundaries for goal setting and evaluation. 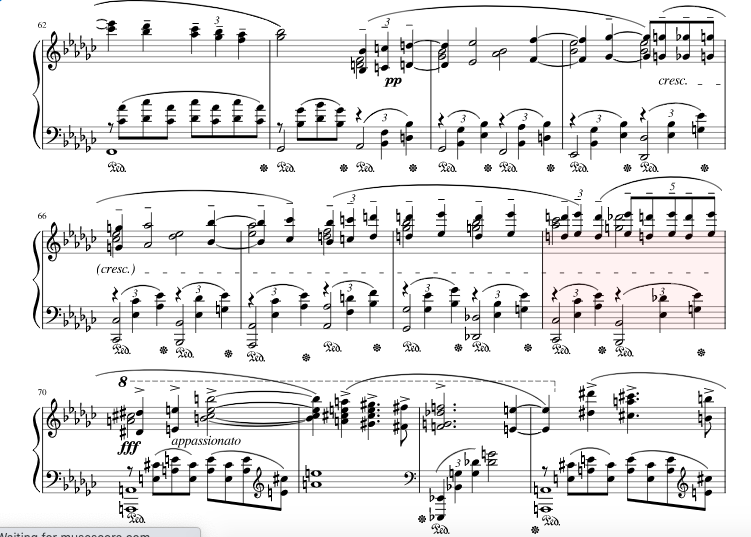 The sections that were demarcated varied from 10 to 20 bars in length. During my practice, I would spend some time in each section and before moving on to the next section, I would ask myself two simple questions: “Is that how I wanted it to sound like?” and “What can I do to further improve it?” The targeted improvements could be as trivial as increasing the connectedness between the triplets, focusing on using pressure from the fingertips or shoulders as I play the chords to give off a heavier tone, the part of the keys I would be in contact with, having both hands play together more cohesively. From bars 63 to 69, I first worked on the left hand and I tried to create a fuller sound but at the same time, vary the dynamics from pianissimo at bar 63 to achieve a fortissimo at bar 69. I did a gradual crescendo by gradually shifting my focus from my fingertips, to forearms and to my shoulders. This method enabled me to not only create dynamics but also have a greater sense of direction in the music that I was playing. After doing the same for the right hand, I then combined both hands together and I realized that the cohesiveness of both hands was more easily achieved as there was a common ground established for the both hands to base on, which was through the shifting of focus in parts of the body. An interesting finding that I had, was that by learning the music via shifting my focus from different parts of the arm, it helped me with memorizing the music more effectively as these served as cues in helping me recall the music. On top of that, I would listen to professional recordings and take note of how different musicians interpret that particular section of the piece. Such a process prompted my brain to take up a higher-level of cognitive processing and thinking, which maintains my practice of a certain standard, allowing for my mind to be constantly focused and mastering the piece more efficiently.

Apart from demarcating section boundaries, I also kept my practice sessions in blocks of 45 minutes. In between blocks, I would give myself a 5-minute break. By doing so, my mind gets to have a break and when I pick up my instrument again, my mind would be in a fresh and clear state, ready to practice again.

Deliberate practice can be carried out as long as we actively remind our minds to keep working throughout the course of practice. Some changes might seem insignificant, but they help greatly in our productivity. Instead of running through passages unconsciously over and over again, do seek out new strategies which might help you in your practice session!

Kageyama, N.  Specific Times When SMART Goals Can Be Counterproductive (and What Strategy to Use Instead). Bulletproof Musician. https://bulletproofmusician.com/. (2019)

Performers indeed tend to react rather than plan in practice sessions.

Performers also tend to think of practice sessions as not being the place for creativity, separating that from creative endeavours. However, it is worthwhile to consider how one can be creative not just with repertoire, but with the process of practicing, with Matthew Trusler noting of his teacher Ruggiero Ricci: “The clue for Ricci was in constant experimentation. And that’s where he cam into his own completely. He was always, always trying new things.” (The Strad, 2017). I imagine that ‘always’ included time in practice, rather than just in performance.

Whether consciously or not, that experimentation could well be some combination of reacting (that we normally do) and planning (that this article advocates). The importance of this is to veer from unproductive practice – that even the composer of one of the most famous violin studies, Carl Flesch, writes: “Every mechanical activity, up to a degree, reacts in a manner destructive to the imagination. Now the art of study is based on the faculty of making the spirit immune to that poison.”  – Dr Andrew Filmer

Physiotheraphy for My Carpal Tunnel Syndrome